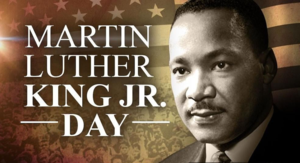 Observed each year on the third Monday in January as “a day on, not a day off,” MLK Day is the only federal holiday designated as a national day of service to encourage all Americans to volunteer to improve their communities.

During the less than 13 years of Dr. Martin Luther King, Jr.’s leadership of the modern American Civil Rights Movement, from 1955 until 1968, Black Americans achieved more genuine progress toward racial equality in America than the previous 350 years had produced. Dr. King is widely regarded as America’s pre-eminent advocate of nonviolence and one of the greatest nonviolent leaders in world history.

Drawing inspiration from both his Christian faith and the peaceful teachings of Mahatma Gandhi, Dr. King led a movement in the late 1950’s and ‘60s to achieve legal equality for African-Americans in the United States. While others were advocating for freedom by “any means necessary,” including violence, Martin Luther King, Jr. used the power of words and acts of nonviolent resistance, such as protests, grassroots organizing, and civil disobedience to achieve seemingly impossible goals. He went on to lead similar campaigns against poverty and international conflict, always maintaining fidelity to his principles that men and women everywhere, regardless of color or creed, are equal members of the human family.

Dr. King’s orations and writings are among the most revered in the English language. His accomplishments are now taught to American children of all races, and his teachings are studied by scholars and students worldwide.

In his speech accepting The Nobel Peace Prize in 1964, Dr. King said, “I believe that unarmed truth and unconditional love will have the final word in reality. This is why right temporarily defeated is stronger than evil triumphant.”

Transcript and recording of “I Have A Dream” speech, Rev. Martin Luther King